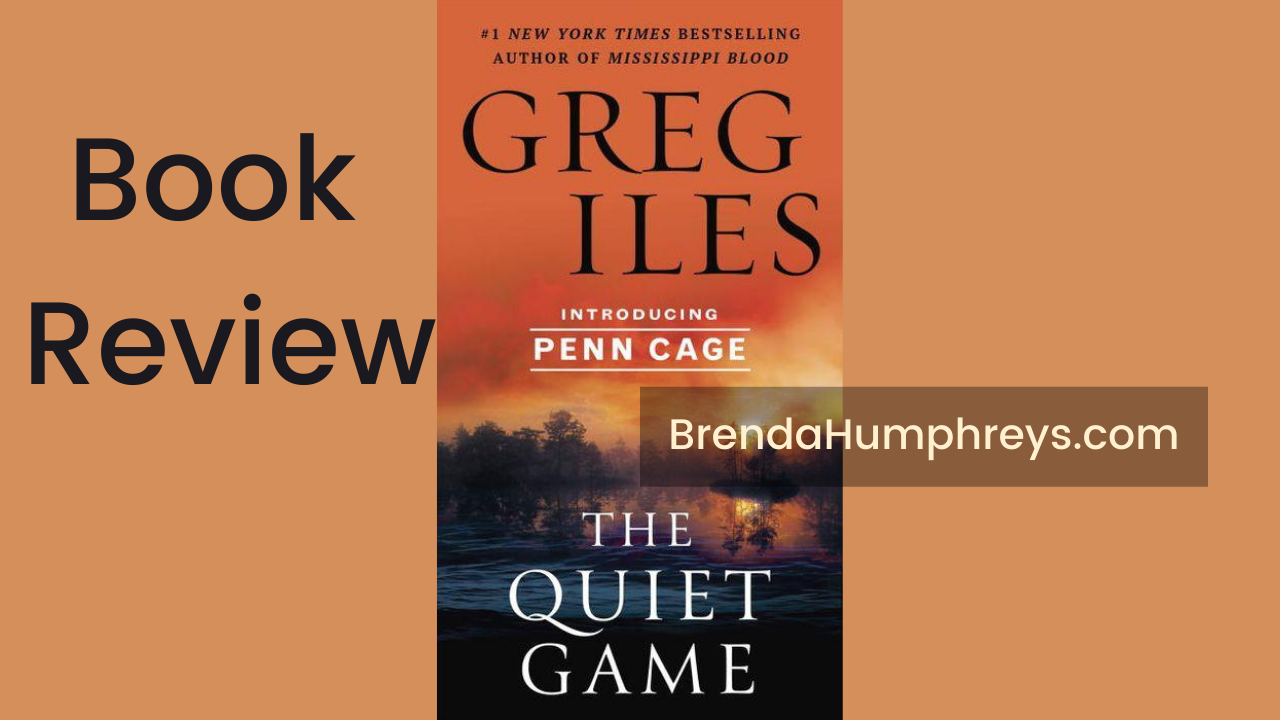 The Quiet Game by Greg Iles is a thriller and suspense novel. This book is part of the Penn Cage series. In this book, Penn searches for answers to a thirty-year-old murder case. After being away for several years, he is back in his hometown of Natchez, Mississippi.

I read some of Greg Iles's other books, including Spandau Phoenix, Cemetery Road, and Mississippi Blood. I love his books. They are so entertaining. After reading a few other books, I read another book by this author. It doesn't matter which one I pick next because they are all good. However, I need a break between books because I like different genres of books. I don't like to read the same type of book back to back.

Penn Cage is the main character in The Quiet Game. He was a former prosecutor in Houston, but now he writes legal crime books inspired by cases that he has seen in his work.

He had lost his wife to cancer seven months before the beginning of the story, and Annie, his four-year-old daughter, is still having difficulty dealing with her mom's death. So Penn decides to move back to Natchez, Mississippi, and live with his parents for a while to help Annie deal with the situation.

Soon after Penn arrives in Natchez, he agrees to an interview with a newspaper reporter, Caitlin Masters. However, when the news article comes out the following day, many people in town are upset about it because he mentions a murder of a black man that happened 30 years ago that was never solved.

"Delano Payton was a black factory worker who got blown up in his car outside the Triton Battery plant in 1968, It was a race murder, like a dozen others in Mississippi, only it was never solved. I'm not sure anybody really tried to solve it. Payton was a decorated combat veteran of the Korean War. And I'll bet you a thousand dollars we're sitting within five miles of his murderers right now." (p. 71)

However, a few days later, Penn decided to take the case because he found out that Leo Marston, the judge in Natchez, may have been involved in the murder. Leo Marston was a lawyer in a malpractice lawsuit against Penn's father more than twenty years ago. At that same time, Penn was dating Leo Marston's daughter, and she suddenly disappeared.

"For years I thought it was based on Leo Marston's attack on my father, but this was self-delusion. My anguish was not for my father's pain but for my own. The most devastating result of Marston's merciless legal persecution of my father was the end of any possibility that Olivia Marston and I would have a future together. And that altered my life in ways beyond measuring. (p. 189)

Penn originally agreed to investigate this cold murder case because it would be revenge on a man who caused pain to him and his family two decades ago.

Caitlin, the newspaper journalist, and Penn work together to solve the mystery. The investigation leads to many answers to Penn's questions about his life, especially about Olivia.

The Quiet Game has many storylines with lots of complications. In addition, the story sometimes goes back to when Penn was younger. Consequently, there are many pieces of Penn's life that the reader will try to figure out what happened and its reasons.

The book contains mostly conversation. There are a few paragraphs that explain what is going on. Everything is from Penn's point of view.

Many more storylines in The Quiet Game make the book very interesting. While reading the book, I tried to piece all of the information together. The book summary above is a tiny portion of the drama that happens in the story.

The Quiet Game includes many famous people's names, making it more interesting because it makes the story more real. For instance, J. Edgar Hoover played a part in the murder investigation. Therefore, his name is mentioned several times throughout the book.

I enjoyed reading The Quiet Game. It is an excellent book for anyone who likes suspenseful crime stories.