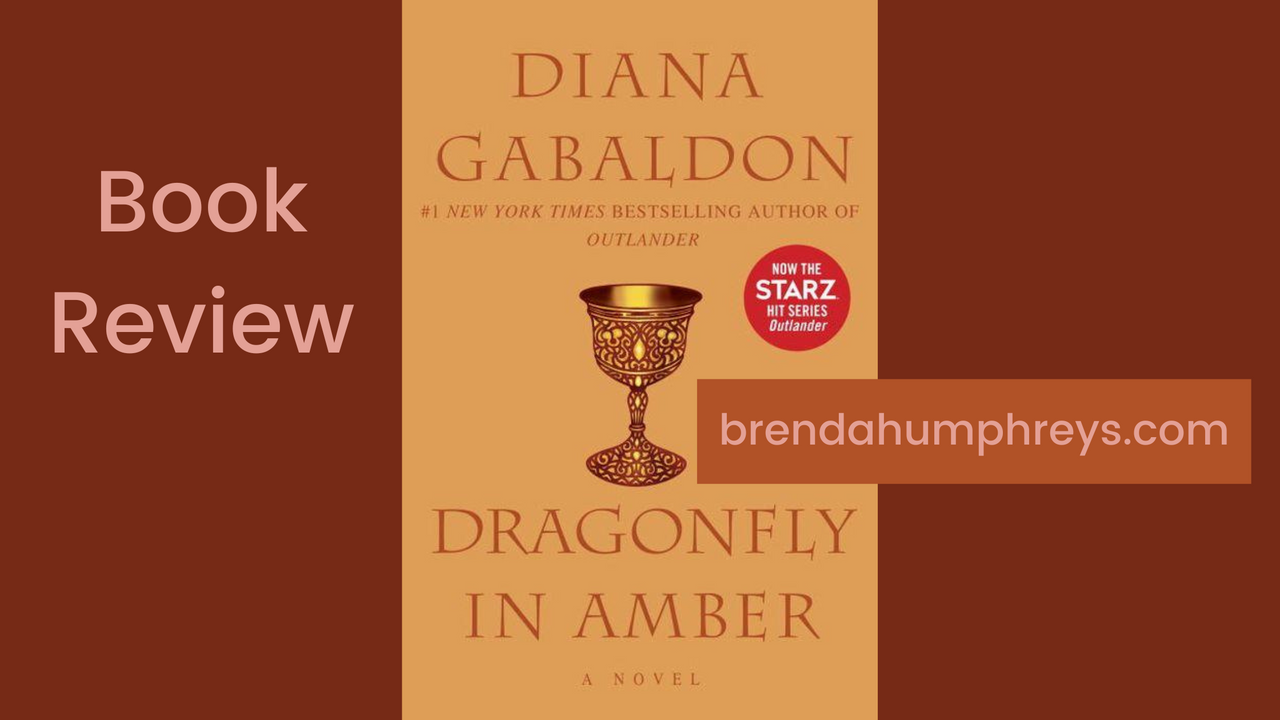 Dragonfly in Amber is the second book in the Outlander series. There are currently nine books in the series. Diana Gabaldon, the author, is continuing to write more novels. Although people can read each book independently, I feel it is best to read them in order. The author briefly summarizes events in Outlander, the first book in the series, throughout Dragonfly in Amber when it is appropriate to explain the background of a past event or character.

I read Outlander and was so captivated by the story that I wanted to read the next successive book in the series.  I'm fascinated by this book series.  There is so much adventure and romance.

In Dragonfly In Amber, the author reviews events from  Outlander when appropriate to explain who a character or event is. At the same time, Claire tells her daughter, Brianna, and Roger the story of how she went through the stones and ended up in the eighteenth century and consequently met Jamie Fraser, Brianna's father. This summary is also suitable for people who read the first book, but it has been a while before reading this book.

Dragonfly In Amber begins twenty years later, in 1968, when Brianna is 20. Frank Randall had raised Brianna as his own, even though he knew she was Jamie's daughter. However, Claire had promised Frank that she would not tell Brianna the truth while he was still alive. Frank has been dead for two years now, and Claire felt it was time to go back to Scotland to tell Brianna the truth about who her birth father is.

For the rest of the book, the story continues in the eighteenth century, in 1744.   It picks up exactly where Outlander left off. Jamie, Claire, and Murtagh were heading to France on a ship to escape from Jamie getting captured again in Scotland.

Claire and Jamie are in France trying to prevent the Culloden battle because Claire knows that most of the Scotland Highlanders die on this day. She is afraid that Jamie will be one of the tragedies in that battle. So Claire is trying to change history.

Many years before meeting Claire, Jamie had spent time in the army in France and stayed with his cousin, Jared Fraser. Therefore, Jamie was familiar with France and had contacted Jared to ask for assistance in finding somewhere to live and find a job. As a result, Jared agreed with Jamie that he and Claire could stay in his large house in Paris, including the use of his servants, and receive a salary for six months while he went away on business. In exchange, Jamie would take care of Jared's wine warehouse.

In the meantime, Jamie and Claire's real goal in Paris is to prevent the second Jacobite Rising from happening. So they figured if they could intercede with Charles Stuart raising money to finance the Jacobites to fight against England, the rising won't happen.

"To all outward intents, Jamie was an avowed Jacobite supporter; in that guise, he visited Charles, entertained the Earl Marischad to dinner, and attended court.  And so far, he had been skillful enough, in his chess games, his tavern visits, and his drinking parties, to undercut the Stuart cause while seeming outwardly to support it.  Besides the two of us, only Murtagh knew that we sought to thwart a Stuart rising - and even he didn't know why, merely accepting his chief's word that it was right.  That pretense was necessary, while operating in France.  But the same pretense would brand Jamie a traitor, should he ever set foot on English soil." (p. 434)

Throughout their time in France, Claire is pregnant.  She is trying to deal with her emotions and sickness.  Also, Claire decided to help at a hospital to use her skills and not be bored at home.  Jamie was off doing his business, and she wanted to feel productive also.

Traveling  Back To Scotland

Jamie and Claire went back to Scotland. They were unsure if their success in France to deplete the financing of the second Jacobite Rising will change history. However, Charles Stuart was determined to try to regain the British throne. Therefore, they needed to prepare for battle.

If Jamie and his men fight in the rebellion, they know they will either die in battle or be killed afterward by the British for being traitors. With Claire's knowledge of history, she and Jamie try to avoid these events from happening. But in the end, Jamie wants Claire to be safe.

"Claire, ye know what it cost me to do this for you - to spare Randall's life.  Promise me that if the time should come, you'll go back to Frank."  His eyes searched my face, deep blue as the sky in the window behind him.  "I tried to send ye back twice before.  And I thank God ye woulna go.  But if it comes to a third time - then promise me you will go back to him - back to Frank.  For that is why I spare Jack Randall for a year - for your sake.  Promise me, Claire?" (p. 403)

Jamie is gathering an army to fight England.  Since Jamie was in the military before in France, he knew how to fight. He transferred those skills to teach his new Jacobite army how to fight.  The battle at Culloden is approaching.  They are still hoping for a different outcome than what historians tell centuries later.

My Analysis of Dragonfly in Amber

The drama in Dragonfly in Amber makes it exciting to read, even though it is over 900 pages. There is much more to the story than Jamie and Claire trying to change history. Claire is pregnant, and she deals with the emotions of that. Also, the author describes the characters and what life was like in Paris in the 18th century. It is much different than it was in Scotland during the same period.

This book gives us another segment of Jamie and Claire's romance and struggles. They go through a lot, but their marriage stays strong. I can't wait to read Voyager, the third book in the Outlander series. I like that the story goes back and forth between the past and the future. Although we were mainly in the 18th century, we also saw their life in the 20th century. It is much safer in the future.

Dragonfly in Amber is an excellent book for people who like time travel and history.  We got to experience what life was like in both France and Scotland in the 1700s.  Jamie and Claire were in France fifty years before the French Revolution.